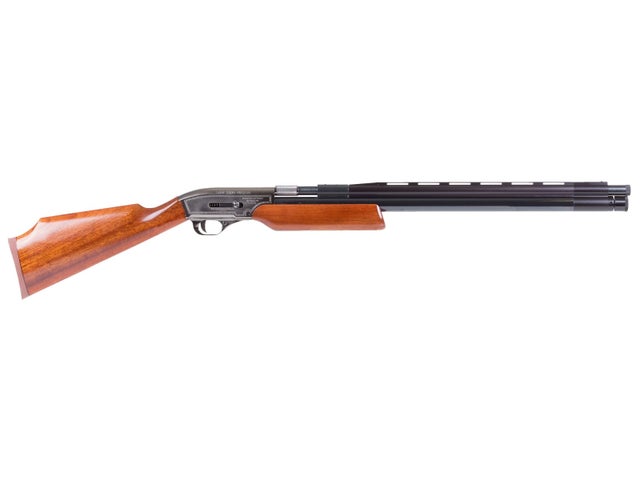 The Seneca Wing Shot II .50 caliber precharged pneumatic (PCP) bolt-action shotgun offers airgun hunters the versatility of choosing either .50 caliber shotshells or bullets. Beautifully balanced and adorned with attractive engraving and a handsome hardwood stock, the bolt action Wing Shot II is effective for wing shooting dove or quail-sized birds, small game, and large game hunting including predators, hogs and even trophy whitetail. The addition of a ventilated rib atop the barrel makes acquiring targets easier than ever before!

SHOTGUN: Choose the shotgun option and enjoy velocities of 1130 feet per second with 360 foot pounds of energy using No. 8 shot. With consistent spreads of 12" at 20 yards, it's the ideal tool for upland or bushytail hunting.

RIFLE: UNSCREW THE CHOKE BEFORE USING LEAD BULLETS. Hunting for larger game? With .50 caliber bullets the Wing Shot II rifle offers speeds of 760 fps and fpe exceeding 245. That's more than enough power to take a javelina or coyote with a well-placed shot.

BOLT-SLINGER: Arm your Wing Shot II with Air Venturi's Air Bolts to turn your air shotgun into a hard hitting arrow launcher! Now more speargun than air rifle, be careful not to "Robin Hood" or split bolts already on the target --they are that accurate! Capable of speeds up to 500 fps and 238 FPE, Air Bolts are a fusion of innovative design and incredible knockdown power.

Enjoy unprecedented flexibility and convenience at an entry-level price with this first-ever mass-produced .50 caliber PCP air shotgun. The fine craftsmanship and attention to detail will make this gun a special addition to your collection.

Better than Layaway where you get your product after payments are complete, Buy and Play now and pay in 4 payments up to $600  -  Or if you get Paypal Credit, the amount is only limited by your credit score!

Both options are available in the link below.
​
Either way, payments are interest-free if paid in-full by the end of the term.